MAGAZINE SPREAD – LIVING IN THE SHADOWS 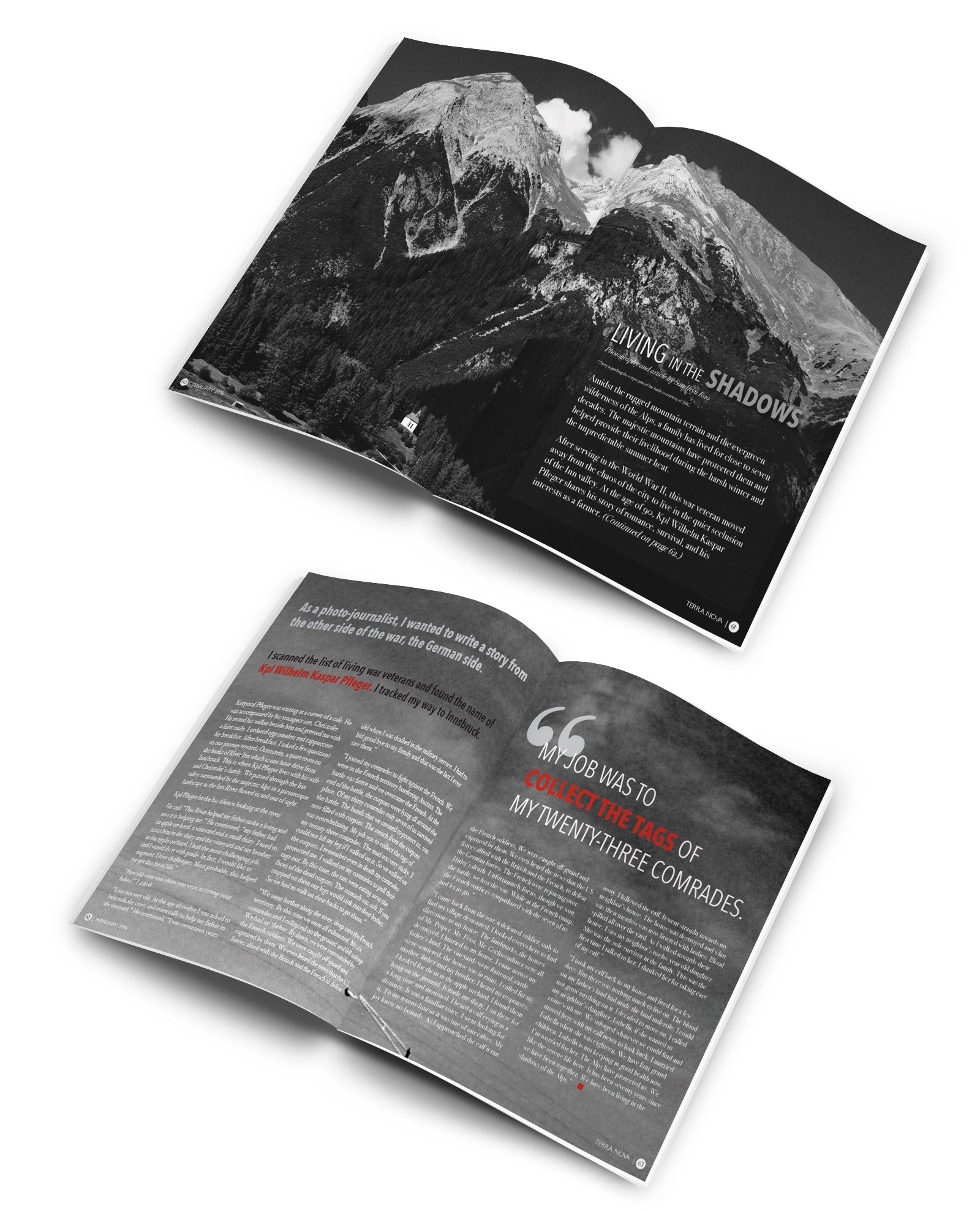 This design of a Magazine Spread and the story was created for this beautiful photography of the Majestic Alps. Passing by the Alps I shot this house that looked insignificant before the Alps. The story justifies the feeling of these mountains. The picture of the Alps and the story was also written by me. The story is about a War veteran who fought during the World War II from the German side.

As a photo-journalist, I wanted to write a story from the other side of the war, the German side.

LIVING IN THE SHADOWS

Photography and article by Sandhya Rao

* Story regarding the corpse part of the battle is courtesy of BBC.

Amidst the rugged mountain terrain and the evergreen wilderness of the Alps, a family has lived for close to seven decades. The majestic mountains have protected them and helped provide their livelihood during the harsh winter and the unpredictable summer heat.

After serving in the World War II, this war veteran moved away from the chaos of the city to live in the quiet seclusion of the Inn valley. At the age of 90, Kpl Wilhelm Kaspar Pfleger shares his story of romance, survival, and his interests as a farmer.

I scanned the list of living war veterans and found the name of Kpl Wilhelm Kaspar Pfleger. I tracked my way to Innsbruck.

Korporal Pfleger was waiting at a corner of a cafe. He was accompanied by his youngest son, Christofer. He rested his walker beside him and greeted me with a faint smile. I ordered egg omelets and cappuccino for breakfast. After breakfast, I asked a few questions on our journey towards Osterstein, a quiet town on the banks of River Inn which is one hour drive from Innsbruck. This is where Kpl Pfleger lives with his wife and Christofer’s family. We passed through the Inn valley surrounded by the majestic Alps in a picturesque landscape as the Inn River flowed in and out of sight.

Kpl Pfleger broke his silence looking at the river.

He said “This River helped my father make a living and now it is helping me.” He continued, “my father had an apple orchard, a vineyard and a small dairy. I used to assist him in the dairy and the vineyard and my brother in the apple orchard. I had the most challenging job, and I would do it with pride. In fact, I would like to augment: I love challenges. Most probably, this helped me get this far in life.”

“How old were you when you were assisting your father?” I asked.

“I was not very old. At the age of twelve I was asked to help milk the cows and eventually to help my father in the vineyard.” He continued, “I was seventeen years old when I was drafted in the military service. I had to bid good bye to my family and that was the last I ever saw them.”

MY JOB WAS TO COLLECT THE TAGS OF MY TWENTY-THREE COMRADES.

“I joined my comrades to fight against the French. We were in the French territory bordering Austria. The battle was fierce and we overcame the French. At the end of the battle, the corpses were lying all around the place. Of my thirty comrades only seven of us survived the battle. The bunds that we created to protect us, was now filled with corpses. The stench from the corpses was overwhelming. My job was to collect the tags of my twenty-three comrades. The mud was very sticky. I could not lift my leg if I walked on it. So we walked on the corpses. I remember even in death my comrades protected me. I walked on my comrades to pull their tags out. By this time, the rats were eating away the faces of the dead corpses. The stomach was soft. If you stepped on them our legs would sink into their bodies. So we had to walk on their backs to go about.” (This paragraph is courtesy of BBC.)

“We went further along the river, deep into the French territory. By this time we were all exhausted. My six comrades and I collapsed on the ground and fell asleep. We had no shelter. By dawn, we were surrounded by the French soldiers. We were caught off-guard and captured by them. We even heard the news that the US forces allied with the British and the French to defeat the German forces. The French were rejoicing over Hitler’s death. Unfortunately for us, though we won the battle, we lost the war. While at the French camp, the French soldiers sympathized with the seven of us and let us go.”

“I came back from the war, a defeated soldier, only to find my village devastated. I looked everywhere to find directions to my house. The landmarks, the houses of Mr. Peiper, Mr. Feist, and Mr. Gschwendtner were all destroyed. I hurried to my house. I came across my father’s land. The vineyards were flattened, cattle were scattered, the house was in ruins. I called for my mother, father and my brother. I heard no responses. I looked for them in the apple orchard. I found them lying on the ground. It made me dizzy. I sat there for a long time and mourned. I heard a calf crying at a distance. It was a familiar voice. I went looking for it. To my astonishment it was one of our calves. My joy knew no bounds. As I approached the calf it ran away. I followed the calf. It went straight towards my neighbor’s house. The house was destroyed and what was their meadow was now littered with bodies. Blood spilled all over the yard. As I walked towards their house, I saw my neighbor’s twelve year old daughter. She was the sole survivor in the family. This was the first time I talked to her. I thanked her for taking care of my calf.”

“I took my calf back to my house and lived for a few days. But there was nothing much to live on. The blood on my father’s land had made the land unfertile. I could not grow anything on it. I decided to move on. I asked my neighbor’s daughter, Isabella, if she wanted to come with me. We salvaged whatever we could find and moved here with my calf never to look back. I married Isabella when she was eighteen. We have four grandchildren. Isabella is not keeping in good health now. I’m worried for her. The Alps have protected us. We like the serene life here. It has been seventy years since we have been together. We have been living in the shadows of the Alps.” —— 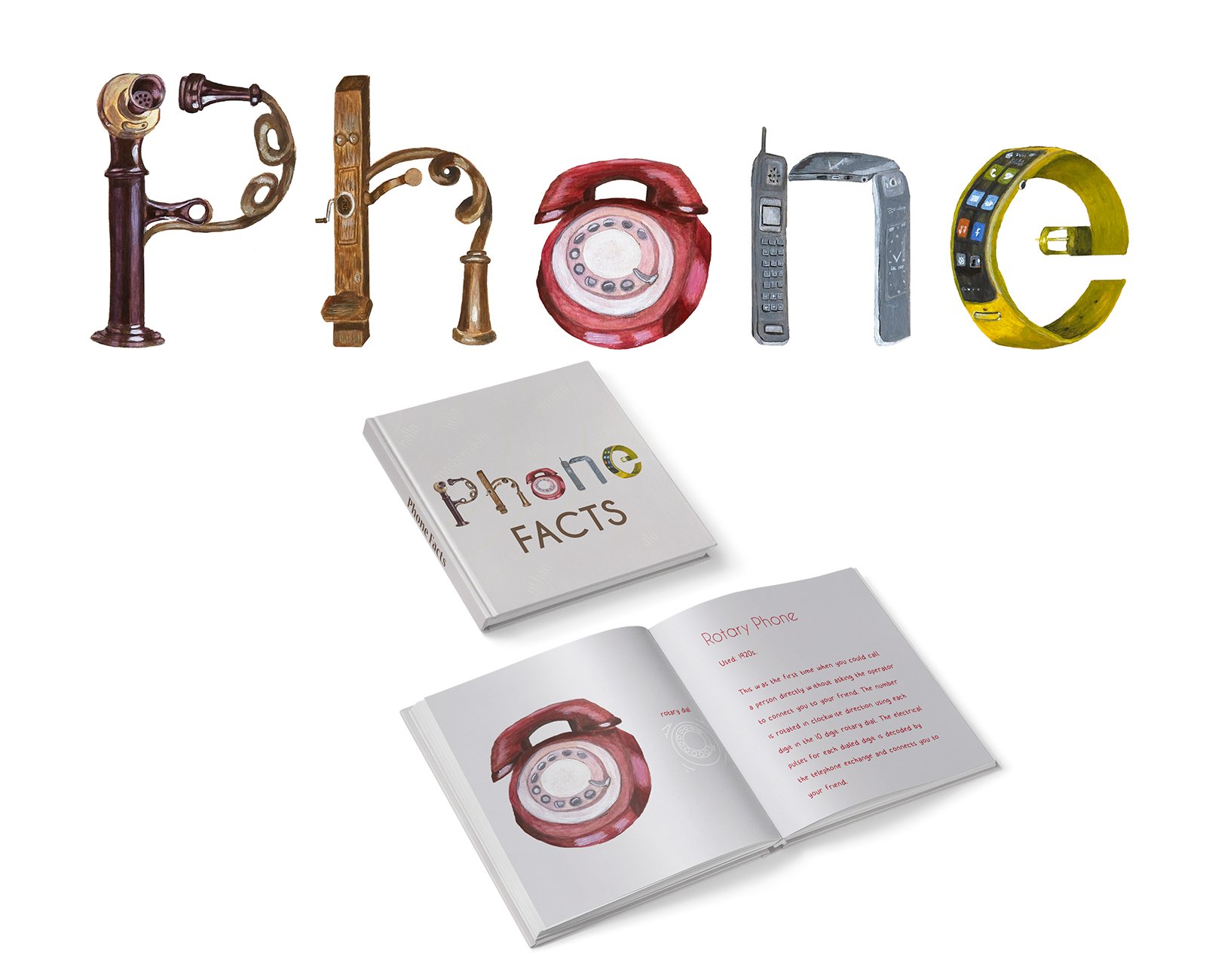 A challenging yet fun word play illustration in which the illustration has to mean the word Phone. Hand drawn and finished with Acrylic paint, this project depicts how phones have evolved over more than a century. The project was designed in the Fall of 2014 even before Apple watch was launched. A Children’s Book was designed with these illustrated letters to educate them while providing fun facts about telephones.